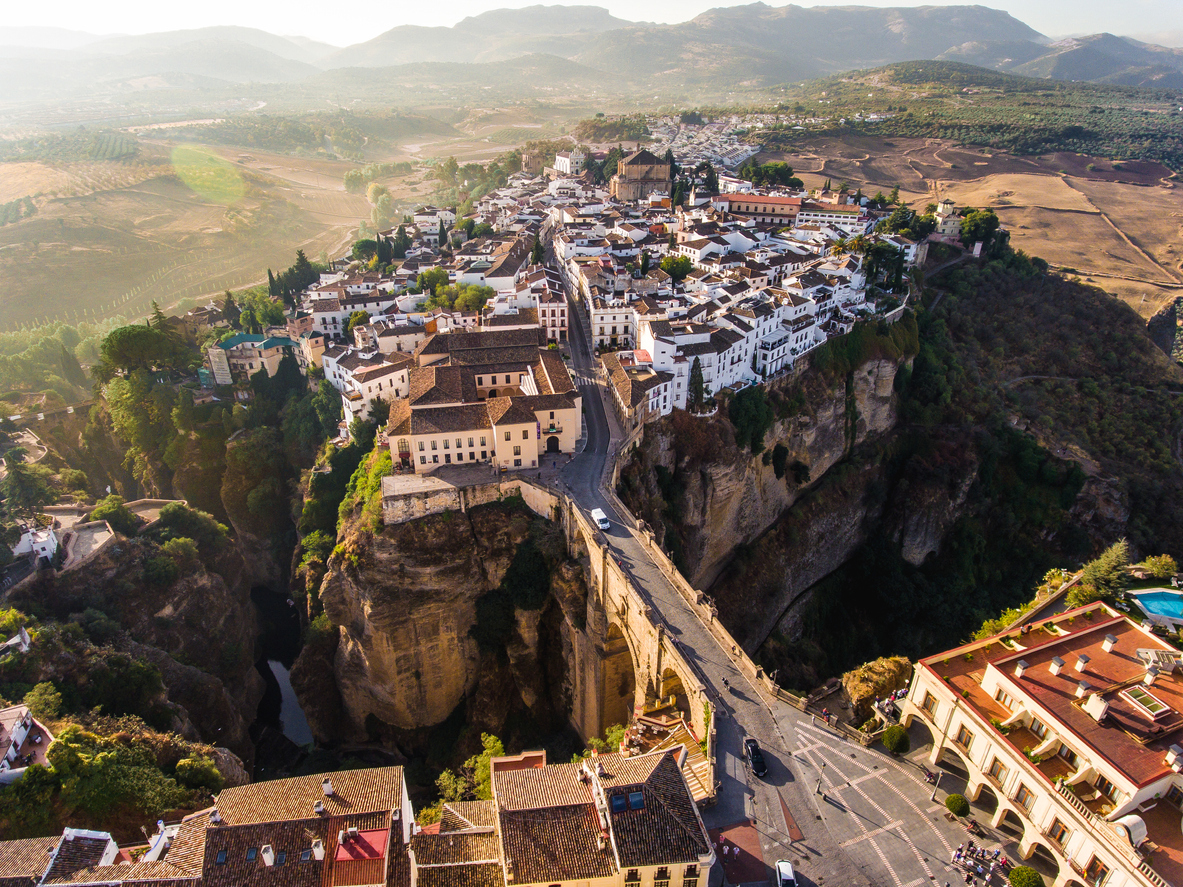 Ronda, with its southern magic, is a city that captivates visitors from far and wide with its characterful streets, mesmerising scenery and fantastically grand allure.

Walk its streets and you will be met with a series of contrasts and a fun-loving spirit. It is no surprise many visiting the town have decided to move here permanently. It is Ronda working its magic on you in the most profound way. The area offers now the possibility of purchasing a wine estate that exceeds any expectations and meets everything you wished for – and it goes by the name of The Wine & Country Club.

This exclusive residential scheme not only aims to be your new home in Southern Spain, but a perfect country retreat where peace, quiet, privacy are paramount. The Wine & Country Club offers a number of wine estates—each with its own vineyard and private organic vegetable garden and orchard—on plots measuring between 5 and 7 hectares. In addition, the Club provides a prime exclusive Client Concierge service to cater to your every need.

After all the ups and downs of history, 1935 saw the restoration of the ruins. This revealed the three steam rooms, the furnace room, the water piping systems, the barrel vaults across the entire roofscape and the semi-circular arches. The history, architecture and current state of repair of the Arab Baths make them one of Ronda’s most important tourist attractions – and some argue more important than the unquestionably beautiful Puente Nuevo, or Ronda’s other claim to fame, the Plaza de Toros.

A Mudejar-Renaissance icon in Ronda, the Mondragon Palace—also known as Palacio del Marques de Villasierra—is one of the town’s most visited buildings, not only because it houses the Municipal Museum, but also for its Moorish courtyards, gardens and stunning views. The building evokes memories of kings, queens and governors who ruled and called Ronda their home.

Carved in the cliffs of the El Tajo’s gorge is a surprising mine and fortress that dates back to the Moorish era when constant wars in Al-Andalus required the city governors to protect water supplies to the people and defenders. Ronda’s Water Mine under the Casa del Rey Moro was built during the reign of Ronda’s King Abomelic at the beginning of the 14th century, when Ronda was an independent Islamic kingdom. Comprising a water mine, a neo-Mudejar style house and a garden that has been listed as a Site of Cultural Interest, the site is a marvel of medieval Islamic engineering, and unique in all of Spain. This is also a perfect spot from where to access the Guadalevin River.

Offering spectacular panoramic views of Ronda’s gorge and Puente Nuevo, the building—which once housed the guildhall and currently boasts the Parador de Ronda—is spectacularly located on the rim of the 120m-deep El Tajo canyon that splits the town in two. Guests may enjoy the views of El Tajo in an atmosphere of tranquillity and comfort, whether from the hotel’s brightly decorated rooms, or from its gardens and swimming pool. Stunningly situated, here you can take delight in the Hoya de Ronda vantage point, the Tagus River, the cuesta del cachondeo (famous for being the last stretch of the 101 kilometres organised by the legion in May), the Sierra de las Nieves and the Parque Natural de los Alcornocales.

The cave church outside Ronda, known as the Virgen de la Cabeza, is a 10th century hermitage built sometime around 970-980AD, and is just a short walk out of Ronda. Most people should find this Ronda walk easy to do and a way to get out of the city for some of the most spectacular views of the Ronda skyline you could imagine seeing. The hermitage started as a home for the monks of the area who would travel to Christian communities to administer mass and hear confessions, and then return to the hermitage where they slept. In the 1980s, the Hermandad de la Virgen de la Cabeza restored the hermitage and keeps it currently running. 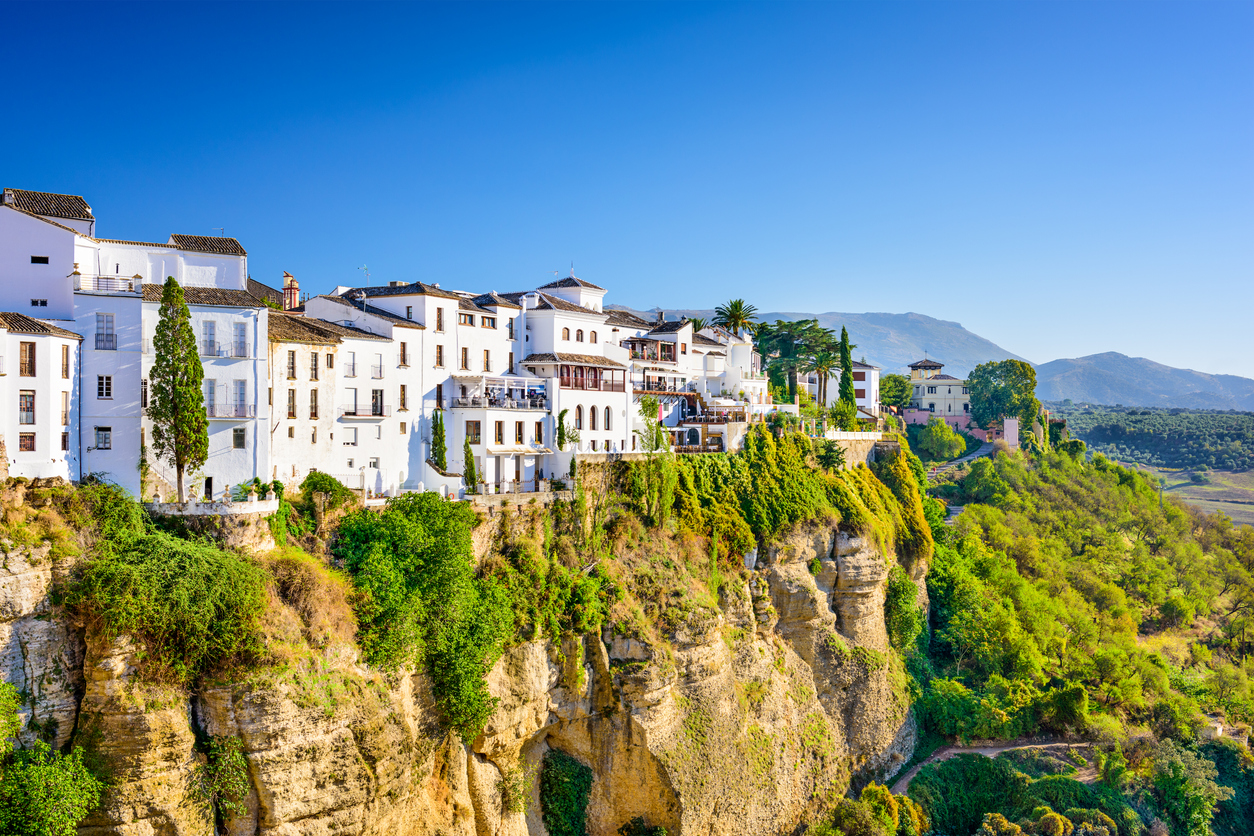 One of the few cities in the world to be naturally split into two halves, the second half of the 18th century saw the construction of the bridge in an attempt to link the two halves – the modern side (where the Plaza de Toros (bullring) and the Parador Hotel are located) and the old town. Stones from the gorge were used for its construction. A first attempt at construction took place in 1735 but structural deficiencies led to collapse. Once successfully completed—thanks to the Real Maestranza de Caballeria de Ronda and taxes collected at the May Fair—, it long served as a prison. Puente Nuevo is considered one of the masterpieces of 18th-century engineering.

Listed as a Site of Cultural Interest, the Plaza de Toros (bullring) in Ronda is home to the Real Maestranza de Caballeria de Ronda, Spain’s oldest and most noble order of horsemanship and an order that traces its heritage back to 1485. Considered to be one of the city’s architectural and historical jewels, the bullring only has seating for 5,000 spectators, hardly the largest in the world. But, it does have the rueda, which is the large round circle of sand and is the largest in the world at a diameter of 66m.